Over a bed of salad, topped with crumbled walnuts

To repeat myself in so many ways, fish caters to an easy method for whipping up a quick, protein-rich meal.  Why not kick it up a notch and try it 4HB crispy-style?  I feel almost guilty claiming this to be a new recipe; but a new method is certainly worthy of a new post.  And while not quite full-on breaded quality, the almond flour will get you a whole lot closer than you’d expect.  And you’ll feel you’re giving yourself a bit of a treat! 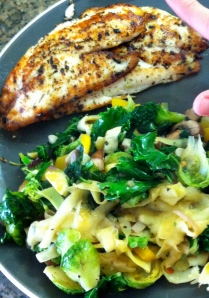 Shown above with:  Squash Noodles with Stir-Fried Veggies

I’d like to give a shout out to all the little fishies out there! Thanks for offering up a great way to throw some variety into the meal rotation.  I’m sure you flip for joy over your role in my world.

Cooking fish can be much quicker and simpler to prepare than a boring ol’ chicken breast. Truly! And let’s be honest.  It’s not every day that I am so prepared with a plan before I even head out the door for the day (a.k.a. slow-cooker meals…which clearly takes some pre-planning).  And some days, I’m just pretty beat from the day, and don’t particularly feel like spending too much time cooking up some creation! So in these situations, there’s not much that really beats a quick fix of a fish on top of a huge pile of salad veggies.

The idea of seafood is a bit intimidating initially for some, for certain. But tame it out a little, use the right seasonings, and you’ve got a good potential of bringing those fish-fearing folks over to the sea side.  One thing that I have learned, at least when it comes to white fish such as tilapia and halibut, is that less is more.  And nothing seems to handle this on the seasoning front better than a lemon/pepper version.

One disclaimer I always like to note about fish is – the less “fishy” they smell, the fresher those little flippers are.  So if you’re buying your fish already thawed at the seafood counter, I’d advise using it within 2 days.

See? Sometimes the intro is just way more monstrous than the recipe, itself!

*Note:  This same recipe also works well if you prefer to cook it on a grill.  Simply omit the coconut oil and pan-frying steps.  Put the fish on a square of aluminum foil, and place the foil on a pre-heated grill over medium-high heat.  Cooking time will be similar (if not a minute or 2 more), but you can always test for done-ness once the fish can be flaked easily with a fork.

Tilapia over a veggie-filled salad, sprinkled with fresh cilantro and red cabbage

I guess you can say I dig the fishes.  Who doesn’t like the idea of a solid chunk of Omega-3’s kickin’ in their system? Yes, fish are pretty good for you; and you can do a good job of making them tasty.  I once cowered at the idea of cooking fish…that is, before I knew much about how to cook ’em. Seems like it would be complicated — right? Not so much.  Probably one of the easier, less time-consuming dinners.  Sure, maybe the fish counter is a TAD pricier than the haphazardly piled pre-packaged chicken breasts a few feet down.  But you can’t beat variety; and a little dose of extra health benefits as a bonus, at that.

As for salmon, it is one of my absolute favorites.  I pretty much stick to the fish basics: salmon, and the commonly-known white fish: halibut and tilapia.  Let it be known, however, that I am not against other types of fish! I just have these down pretty well at this point…and I’m satisfied! When I feel the itch to expand….oh – I will expand.  And you’ll probably read a blog write-up about it. Isn’t life predictable like that?

Have I successfully “lured” you in yet?

Pull the salmon from the refrigerator.  Now, there are several ways to buy salmon.  I usually get it straight from the counter at Henry’s (or other establishment where I consider the butchers to be super friendly – only because it makes me come back for more! And I love it when butchers give you unsolicited cooking tips if you aren’t exactly familiar with a product).  But you can also buy salmon frozen.  You’ll need to make sure to think ahead and thaw it out by either leaving the frozen salmon in the fridge overnight and/or during the day; or defrosting under cold water.  Use caution when defrosting on the spot, however; as you do not want to start the cooking process during the defrost process.

Rinse off the salmon under cool water.  (note:  do not rinse seafood under warm water, as this is a bacteria catalyst! And to repeat myself – you don’t want to start warming the fish before you actually cook it.  Be gentle folks!! Be sweet to your salmon!).

After rinsing, place the salmon on a baking pan lined with aluminum foil.

Lightly drizzle  the fish with olive oil and spread with a basting brush to coat the skinless portion of the fish.

Season with sea salt and pepper; squeeze the juice from a small slice of your lemon over the meat.  Cut the lemon slice into 2 halves and rest on top of the fish.  Place a couple sprigs of fresh rosemary over top, to evenly distribute over the meat.

Now, pop that fish into the oven.

Bake for approximately 15 minutes.  You can easily test when it’s ready if it flakes easily with a fork.  I tend to like my meats cooked more rather than less (I know, the shame!), but I left this one in for maybe 17 minutes.  But I could have easily pulled it out in 15.

Note: Another important thing to keep in the back of your skull is that fish will continue to cook once you’ve pulled it out of the oven.  So don’t overcook, or you’ll have a pretty dry-tasting fish.  And who’s the last fish you knew who had an adoration of arid environments?

So here’s the cool thing about aluminum foil.  Yes, I know I have mentioned in previous posts that it kicks the clean-up time by MORE than half.  But another fantastic thing about this product is that; when you are baking a fish with skin on it, you can de-pan it, all the while, leaving the skin entirely behind.  (I used a fish spatula, which is essentially a longer-narrower version of a regular spatula; but appreciating that this is a pretty specific piece of equipment to identify in a regular kitchen, let it be known, without shame, that a standard spatula works just fantastically).

Soo…that’s really about all there is to it.  And, while I let this fish bake itself into a magnificent belly pleaser; I had some veggies roasting simultaneously in that same oven.  1/2 pound of fish per person (2 people); and a big pile of garlicky and seasoned roasted veggies on the side.

(VERY much a side note – but just a little hint if you try this same idea for your veggie side – start the veggies up a little earlier than your fish for maximum tenderness.  But damn, if veggies don’t taste good no matter how you do them up).

Thanks for fishing in.